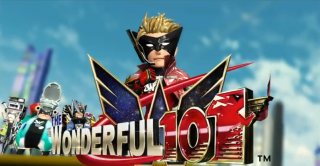 We all know of the overall bad reputation the Wii U has. It sold very poorly and its games sold even less. Many use the Wii U just as and upgraded Wii to use HD output and when the Switch came out, many Wii U exclusives were ported over.

This game alone, in my opinion, gives your Wii U much more value. It is a great game, made by those genius at Platinum Games who created, Bayonetta, Nier: Automata and many others. And if you played any Platinum games in the past, you should pretty much know what kind of gameplay to expect.

The Wonderful 101 follows the story of a team of heroes called “Wonderful 100” who fight against an army of aliens attempting to invade the Earth. In particular, it focuses on the hero Wonder Red and his other “colored” colleagues Wonder Blue, Green, Pink, Yellow, White and Black (each representing a certain weapon) who lead the team of heroes through several operations to save the planet and figure out a way to stop the invasion.

The gameplay is your action-based hack-and-slash Platinum-style thing, with some shades of Okami here and there. You see, while each Wonderful One is relatively weak on their own, it can link to other Wonderful Ones to create huge weapons with which they can fight their enemies. The player has to draw shapes with either the Wii U game pad or the right stick to assemble the heroes and select a weapon. The bigger the shape the bigger and stronger the weapon.

Of course, it’s not like you can draw as big as you want. Drawing shapes consumes “unite gauge” which replenishes over time similarly to how Ink worked in Okami. The number of heroes present in your team also limits how big you can draw. The biggest shape you can draw takes 100 people and at the beginning of each level you start with less people in your them. You either find Wonderful Ones around to permanently add in your team or temporarily recruit civilians for the current level.

Speaking of levels, they are linear levels, divided in ranked Missions which pretty much work like Verses in Bayonetta: you fight some enemies and you are ranked based on time, combo and damage you took. The overall ranks of all the missions defines the rank of the whole operation.

Difficulty wise, the game isn’t too hard but it can be very demanding for first time players. Moving, blocking dodging, drawing shapes and attacking all at once is very confusing at first. This is one of those skilled-based games that really gets good once you’ve put some effort into it.

To bring you my perspective, when I first played The Wonderful 101 I died 3 times in the first operation (001-A) and barely got through the first boss at the end of Operation 001-C. I honestly though the game was really hard but I then I replayed the first level many times and when the battle system and enemy patterns clicked into my mind, then the game really opened up.

This unfortunately, didn’t give the game the spotlight it deserved.

As for the plot, The Wonderful 101 is all about escalating to absurd proportions. Just when you thought things couldn’t get more hectic, they do. By 100 times. I’ve got to say, some parts don’t really make logical sense but oh well, it’s a character action videogame, we’re here to bash bad monsters in the face over and over in cool ways, we can’t complain too much about the plot.

Overall, this is a game I recommend to any Wii U owners. Even if you don’t like games heavily based on skill, the difficulty can be lowered so you can sit back enjoy the story. Even game overs don’t force you to retry an entire level, they usually respawn where you were, they just impact on your final score. But if you don’t care about it, then they don’t really matter.

In this LP we went through the Story in Normal difficulty (except one level where I played on Easy by mistake) got all the Wonderful Ones, Secret Missions and Hero Hearts. For completionists , there is a lot to do after the story but not even I got to complete all of that by myself.